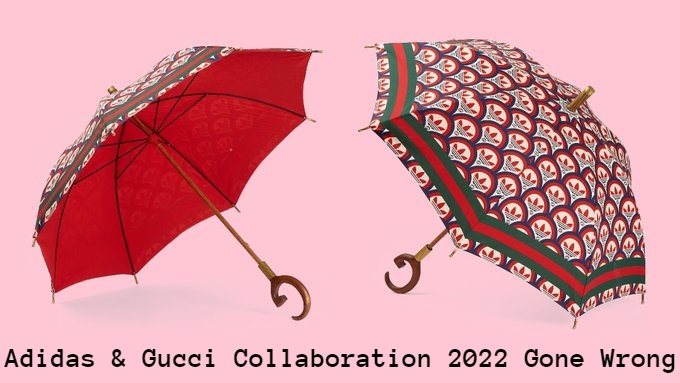 One of the most talked-about things in the upcoming Adidas x Gucci collaboration is €1,290 umbrella and it’s not even waterproof.
Brand alliances may increase customer interest by allowing firms to reach a new target group and generate buzz. Adidas and Gucci have lately added to the buzz by collaborating to produce an umbrella that cannot be used in the rain.
It has a G-shaped luxurious birchwood handle and a print pattern that combines both companies’ insignia, as it is splashed with Adidas’ trefoil print and Gucci’s characteristic trim. Since images of the “sun umbrella” surfaced on social media in China last week, it has prompted much controversy. The Adidas x Gucci collection is set to hit stores on June 7. The Adidas x Gucci collaboration was initially announced in February of this year, with the businesses stating that it incorporates the legacy and creative codes of both brands
This week, the hashtag “11,100-yuan umbrella collab is not waterproof” received over 140 million views on the Chinese social media platform Weibo. According to a Gucci customer care employee, the product is “not suggested for use as an everyday umbrella,” but it has “excellent collector’s value and is fit for usage as a daily accessory.”