Over two months after the draw was conducted, the 2022 World Cup groups are now officially complete. In what will be the final 32-team field before the World Cup expands to 48 teams in 2026, the stage is now set for November in Qatar. We now know the final 32 teams that are heading to Qatar 2022. Here is a look at the teams that have qualified for the World Cup. The tournament will begin on 21st November and will end on 18th December 2022.

The World Cup has 32 teams competing and 31 places are up for grabs in the qualifiers, with the host nation, in this case Qatar, having direct access.

These are the qualified national teams for the 2022 World Cup: 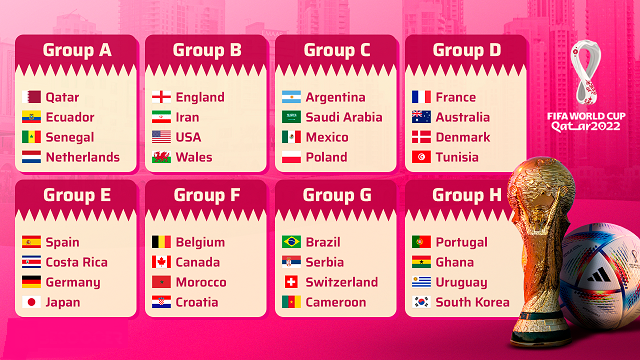 Here we can see the eight groups already formed.

Hosts Qatar will kick off their tournament on home soil against Ecuador, who finished fourth in the South American qualifying stage. The two teams are joined in Group A by 2022 AFCON champions Senegal, and European powerhouses Netherlands who were among the group of second seeds for this year’s tournament.

Group B sees 1966 World Cup champions England begin their campaign against Islamic Republic of Iran. The USA, who finished third in their qualifying group behind Canada and Mexico, were also drawn in Group B with the fourth spot being awarded to Gareth Bale’s Wales, after winning the European Play-off over Ukraine.

Lionel Messi’s Argentina have been drawn in Group C, where they will face Saudi Arabia, Mexico and Poland. Argentina have won the tournament twice in their history, including a home victory in 1978 and a win on the soil of this year’s opponents Mexico in 1986. They will be looking for more glory in a tournament that may well represent Messi’s final chance to lift the World Cup.

Group D sees defending champions and two-time World Cup winners France face off against Euro 92 champions Denmark and African powerhouses Tunisia. The final team in the group was decided in an Intercontinental Play-off, which saw Australia win on penalties against Peru.

In what may be on paper the most challenging group in the tournament, 2010 champions Spain have been drawn to play four-time winners Germany. Japan, who finished second in their qualifying group behind Saudi Arabia, will provide stern competition in Group E. The final spot in the group was decided after Costa Rica won an Intercontinental Play-off against New Zealand.

After securing a historic first qualification in 36 years, Canada now know their fate for this year’s World Cup. They will be joined by Belgium, ranked second in the world, 2018 finalists Croatia and Morocco in a Group F that looks to be one of the most competitive of the tournament.

Brazil have lifted the World Cup on a record five occasions. If they are to do so again they will first need to navigate their way past three strong teams in Serbia, Switzerland and Cameroon. The Seleção are currently ranked first in the world rankings, having won their qualifying group ahead of neighbours and long-time rivals Argentina.

Group H will feature Portugal, Ghana, Uruguay and Republic of Korea, with four strong nations all vying for qualification to the knockout rounds. Uruguay have lifted the trophy on two occasions in their history, while Portgual can rely on the talents of talisman Cristiano Ronaldo, the all-time leading goalscorer in men’s international football, as they aim to win the ultimate prize in men’s football.

Why You Should Hire a Digital Marketing Agency?